I’ll assume anyone reading this knows who Dr. Horrible is (and if you don’t shame on you, either download it on iTunes immediately or if you’re in the US it’s out on DVD, and most certainly pay the official site a visit).

Either way, as I’ve finally started to try my hand at sculpting again I thought a sculpt of the Doc would be quite fun (I’ll also be making a Captain Hammer at some point too). Here’s how far I’ve gotten so far, most advanced sculpt I’ve attempted yet, and I think it nearly looks like him, but not sure how much better I’ll be able to make it. Will hopefully get around to making a full figure (or even action figure if I’m feeling brave) at some point.

I finally got round to finishing the Wolverine blank I mentioned in an earlier post, that I’m hoping to turn in to chocolate lollipops for my wedding.

I kept putting it off because it was taking a lot of work trying to get it all symmetrical, smoothed out and to the high level of finish that I wanted, but my fiancÃ©e reminded me that most people that will be seeing these aren’t comic fans and so won’t care if it looks like who it’s supposed to, or if the right and left sides of his costume match, and it’s only likely to last about three seconds after it’s discovered that they’re made out of chocolate before someone bites the head off anyway, so as she was happy with it I decided to leave him asymmetrical and call him finished.

For a bit of variation, I knocked out an equally asymmetrical Spider-Man (black suit so I didn’t have to try and sculpt the webs 😛 ), the texture looks a little weird on him, as I ran out of primer mid spray.

Now this is something that I would usually have posted about whilst I was making it, but as it was a surprise birthday present for the other half I couldn’t.

She loves the book Wicked and as I also bought her a copy of the book, I thought it might be nice to try and make her a proper sculpt rather than one of the simple penguins I usually make. As the ‘witch’ is the hero (anti-hero?) of the book, I wanted to sculpt my fiancÃ©e as the witch and, although I’d actually given up trying to capture her likeness, in the end I’m actually quite pleased with how it turned out on that front, and think it manages to look something (if not completely) like her. I went for a slightly more comedy, friendly generic ‘be-witched’ style, and as I was only working on this when I was alone in the house didn’t manage to complete it to the standard I wanted or start painting it it’s still probably my best piece so far. 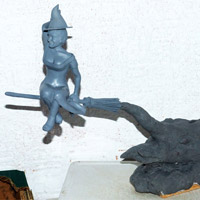 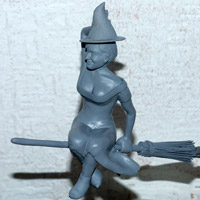 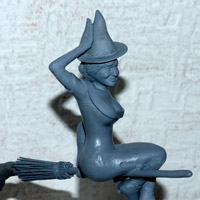 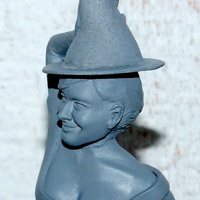 Not 100% sure yet if this is what this will be used for, but we had the idea of having chocolate lollipops on tables at my wedding as favours for the guests (if I’ve not already mentioned it here, I’m getting Married in May after a financially forced long engagement).

Rather than having some generic shop bought ones (which are perfectly acceptable of course and we might still end up going that route of this doesn’t work), we thought it might be fun to have some custom versions, and as we both like comics (well we both do now, sorry for turning you into a geek Snacky) and I’m learning to sculp/cast anyway, here is the work in progress for a prototype Wolverine bust lollipop.

Figure is in 1/12th scale so about 7cm tall and 4.5cm wide at largest points.

It’s known far and wide that I’m not the best at drawing and painting (I’d still have trouble keeping between the lines in a colouring book) which is why I asked Jamie Noguchi if he wouldn’t mind designing and painting a couple of my penguins for me.

Everyone’s favourite Angry Zen Master and artist on the excellent Erfworld, he’s lived up to form and done a bang up job producing these really cool little fellas, cheers Jamie.

Last weekend I attended the second annual Birmingham International Comics Convention (I know, I didn’t realise there’d been a first either, thanks a lot to a friend of mine who told me about it, you know who you are).

I had a pretty good weekend overall and managed to get out of there spending hardly any money on comics/graphic novels etc, and even managed to snag a few free sketches/signatures from a few luminaries of the comics world.

As I pre-ordered tickets I got entry into the launch night the evening before the show in a pub in Birmingham and found myself sat at a table with Bryan Talbot and Jordan Smith with Mike Carey and lots of other ‘names’ milling around within arms length, but I found myself a little shy that evening (uncharacteristically so, especially with a couple of pints inside me) and decided to let them all talk to people they knew instead of bothering them, before retiring fairly early (not the cheapest bar I’ve been to).

Getting to the show late the next morning, I just managed to get in and get a seat for ‘Comic Artists Flip Out’ which had Alan Davis, Staz Johnson and Mark Buckingham at the front of the room sketching whatever they felt like on A1 sketchpads (and taking requests and answering questions at the same time). It was great fun to watch professionals knock out such good pictures in such short order, and the really good part was that everyone in the audience got a raffle ticket before they started and as soon as a sketch was complete they called a number and whoever had a ticket ‘won’ the sketch. It turns out Mark Farmer was sat in the row in front of me and won the first completed sketch which just so happened to be an Alan Davis Batman, (I was gutted to say the least, but then I actually won a Mark Buckingham sketch myself).

Later on after queuing for an age I got to talk to Dave Gibbons who was a genuinely friendly and chatty bloke. As I knew Dave was going to be at this event I thought it would be fun to try and make something to take along and get signed, but as I’m still not very good or fast and only had a limited amount of time to work on anything I decided to use one of the penguin cast-off’s I had lying around from the penguins I make for my fiancÃ©e I made a couple of ‘Rorschach Penguins’ gave one to Dave to keep, and he was more than happy to sign the other one for me as well as do me a little personalized Rorschach sketch and sign all my copies of ‘Watchmen‘.

After a bit more wandering round I just managed to catch Mike Mignola before he went off for the first of his Q&A sessions of the weekend and gave him a ‘Hell Penguin’ custom I’d made and got him to sign one for me too. Unfortunately I didn’t manage to get into his incredibly popular talk that day, but did manage to catch the ‘Darkness Calls‘ talk the next day as well as see the Q&A session with the incredibly talented and unassuming Kevin Nowlan who later on did a quick Wasp headsketch for Susan and a Jack B. Quick for me.

My only regrets from the weekend were missing the Adi Granov and Esad Ribic talk and the Matt Hollingsworth colouring master-classes and that I didn’t manage to get more sketches and signatures, but then there’s always next year.

I decided to make an original and collectable style toy for my girlfriends birthday as a unique gift and it also gave me an excuse to put everything I’d learned in my First and Second attempts into practice.

My first attempt at Toy Making whilst not a complete failure was slightly abortive, but was an interesting experiment and taught me enough to spur me onto a second attempt.

Whilst there is a still some work to be done as the casts I have made need cleaning up and painting, I count this attempt as a near complete success. It is possible to make models, molds and casts at home for very little cost and in a relatively short space of time.

Watch this space to see if I decide it’s worth trying to go into full production at home. Anyone interested in owning their very own limited edition Jerry Collectable Model let me know.

I’d always had it in the back of my head that at some point in the far flung future I’d like to create my own range of limited edition collectors toys similar to the kind of things that can be found over at Kid Robot but based on characters I’d create for my own animations, so that they’d have their own ‘life’ that people could follow in a kind of episodic nature, as and when I found time to animate them.

I was vaguely aware though that to create a bunch of toys you need money. Money for prototyping, money for mold making, and money to get a whole bunch of toys cast, painted and stored, with no prior guarantee that they would be popular enough to sell, so money that you might never see again.

Then a week or two back Angry Zen Master had a cool post about Hiroshi Yoshii’s Blog and how he’s hand making his own range of toys. It’s all in Japanese so I have no idea how/what he’s doing other than what you can see in the pictures (some of which are fairly informative admittedly), but it has inspired me to see what I can do at home with my very meagre budget.

Back in the distant past I used to like to make things and dabble in the odd bit of sculpture, but the only things I’ve made in the last 5 or more years is the odd bit of rickety splinter ridden shelving to hold my ever increasing collection of books comics and DVD’s, so where to start? Whether it’s the wrong way or the right way, I guess is part of the reason for going through this process, but to see what I’m up to and how far I’ve got, go to my new Toy Making page.