Part two is here, or check out my automatically updating Heroes, Villains and Artists page.

They also have these episodes available to download on their site

It’s known far and wide that I’m not the best at drawing and painting (I’d still have trouble keeping between the lines in a colouring book) which is why I asked Jamie Noguchi if he wouldn’t mind designing and painting a couple of my penguins for me.

Everyone’s favourite Angry Zen Master and artist on the excellent Erfworld, he’s lived up to form and done a bang up job producing these really cool little fellas, cheers Jamie.

Last weekend I attended the second annual Birmingham International Comics Convention (I know, I didn’t realise there’d been a first either, thanks a lot to a friend of mine who told me about it, you know who you are).

I had a pretty good weekend overall and managed to get out of there spending hardly any money on comics/graphic novels etc, and even managed to snag a few free sketches/signatures from a few luminaries of the comics world.

As I pre-ordered tickets I got entry into the launch night the evening before the show in a pub in Birmingham and found myself sat at a table with Bryan Talbot and Jordan Smith with Mike Carey and lots of other ‘names’ milling around within arms length, but I found myself a little shy that evening (uncharacteristically so, especially with a couple of pints inside me) and decided to let them all talk to people they knew instead of bothering them, before retiring fairly early (not the cheapest bar I’ve been to).

Getting to the show late the next morning, I just managed to get in and get a seat for ‘Comic Artists Flip Out’ which had Alan Davis, Staz Johnson and Mark Buckingham at the front of the room sketching whatever they felt like on A1 sketchpads (and taking requests and answering questions at the same time). It was great fun to watch professionals knock out such good pictures in such short order, and the really good part was that everyone in the audience got a raffle ticket before they started and as soon as a sketch was complete they called a number and whoever had a ticket ‘won’ the sketch. It turns out Mark Farmer was sat in the row in front of me and won the first completed sketch which just so happened to be an Alan Davis Batman, (I was gutted to say the least, but then I actually won a Mark Buckingham sketch myself).

Later on after queuing for an age I got to talk to Dave Gibbons who was a genuinely friendly and chatty bloke. As I knew Dave was going to be at this event I thought it would be fun to try and make something to take along and get signed, but as I’m still not very good or fast and only had a limited amount of time to work on anything I decided to use one of the penguin cast-off’s I had lying around from the penguins I make for my fiancÃ©e I made a couple of ‘Rorschach Penguins’ gave one to Dave to keep, and he was more than happy to sign the other one for me as well as do me a little personalized Rorschach sketch and sign all my copies of ‘Watchmen‘.

After a bit more wandering round I just managed to catch Mike Mignola before he went off for the first of his Q&A sessions of the weekend and gave him a ‘Hell Penguin’ custom I’d made and got him to sign one for me too. Unfortunately I didn’t manage to get into his incredibly popular talk that day, but did manage to catch the ‘Darkness Calls‘ talk the next day as well as see the Q&A session with the incredibly talented and unassuming Kevin Nowlan who later on did a quick Wasp headsketch for Susan and a Jack B. Quick for me.

My only regrets from the weekend were missing the Adi Granov and Esad Ribic talk and the Matt Hollingsworth colouring master-classes and that I didn’t manage to get more sketches and signatures, but then there’s always next year.

I can’t think of anything that happened in September worth mentioning so I’ll jump right into October.

On the 6th me and a bunch of friends from university got together for the 10th anniversary of when we started uni.
We visited several of our old haunts, reminisced about old times, drank a prodigious amount (but as we’re all over or near the 30 mark now decided it was best to leave off the shots and drinking games we used to play back in the day) and stayed out late dancing to music that was a hit in the 90’s and buying kebabs on the way home (and not entirely unusually dropping mine on the floor before managing to eat it) and then getting up at the crack of checkout (as we were visiting from all over most of us stayed in a city centre hotel) before going for a huge breakfast and another pint before stumbling off home to rest before having to go back to work on Monday.

Now lets hope it’s not another 10 years before the next one (although I do need a bit of a break first 😛 ).

I’ve decided to sell my Toshiba Tecra M4 Tablet PC if anyone is interested in owning it (one careful driver).

It’s a great machine, 2ghz processor, 1 gb ram and an 80 gb Hard Drive it’s comparable to some peoples desktop machines, with the added benefit of the wacom digitizer built into the screen so you can draw (512 levels of pressure sensitivity) write (built in hand-writing recognition) and even dictate to it (built in voice recognition).

I wasn’t using it to it’s full potential even with the Multi-Dock docking station I have for it (included for free in the sale), allowing you to use it like a monitor with a separate mouse and keyboard whilst still using the pen on the screen, either in upright portrait or landscape, or flat on your desk/lap and so thought as it’s still under a year old someone else would get better use out of it than me.

I finally managed to go and see The 300, and I was not disappointed.
My girlfriend admitted it was OK but that she got a little bored due the fact that most of the entire film is a series of battles (and surprising too as I thought at least all of the testosterone filled near nekkid men would have held her interest but it seems she likes a little bit more story if she can get it).
The story itself was good, admittedly a little thin, but if you’re expecting an in depth drama then I think perhaps your expectations are a little skewed anyway if you saw the trailer for this and thought “now there’s the intellectual treat I was looking for”
As a friend of mine described it to me before I went there was “…lot’s of fancy killin’…” and the whole thing looks great throughout What more do you want?, go see it now.

Well they’ve finally done it, I guess they had to sooner or later, the weather forecasters got one right!

I know you might not believe me so I have photographic evidence to prove it. I’m always amazed at how much nicer everything can look under a clean new coating of snow, which is why you’re treated to a picture of my bin for shot 3. Click for larger images. 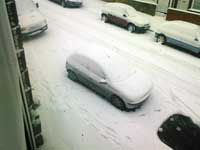 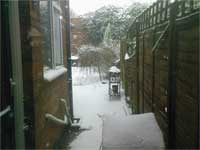 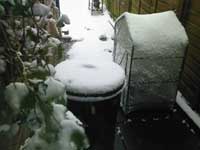 It’s still snowing slightly now, and some kids are even trying to sledge on the pavement out front, which I’ll admit seems strange to me as I grew up in the country and sledging wasn’t sledging unless you found the steepest hill around, preferably with some brambles/barbed wire/deep ditches at the bottom to ‘break your fall’ and used either a bin bag stuffed with hay or for one massively dangerous but fun filled winter a car bonnet! (don’t ask), but hey they seem to be having fun anyway.

Merry Christmas, or for those of you who don’t necessarily celebrate, happy holidays.

Best wishes and I hope everyone has a Happy New Year too.

There have been loads of post and links to this clip all over the internet so I wasn’t gonna put it up here, but hey, I’ve always been a massive Spidey fan for as long as I can remember, so I thought, I can’t let it pass unmentioned on my site, so for those of you who haven’t seen it yet (and for those who want to re watch) here it is.

Looking pretty good I think (apart from the lame Goblin 2 outfit, but then I hated the first Goblin get up too, made him look more like a Power-Rangers villain than any real threat IMHO, ah well they can’t be expected to please everyone)

Another old link here you might already have seen a few months back and it passed me by, but now it seems theres a device which can ‘print’ on the surface of water by producing and controlling a series of small waves and ripples.

Not sure what the point is, but I’d certainly like to actually see it in action close up, and maybe have a go a spelling out words (remember your first calculator at school! 5318008)